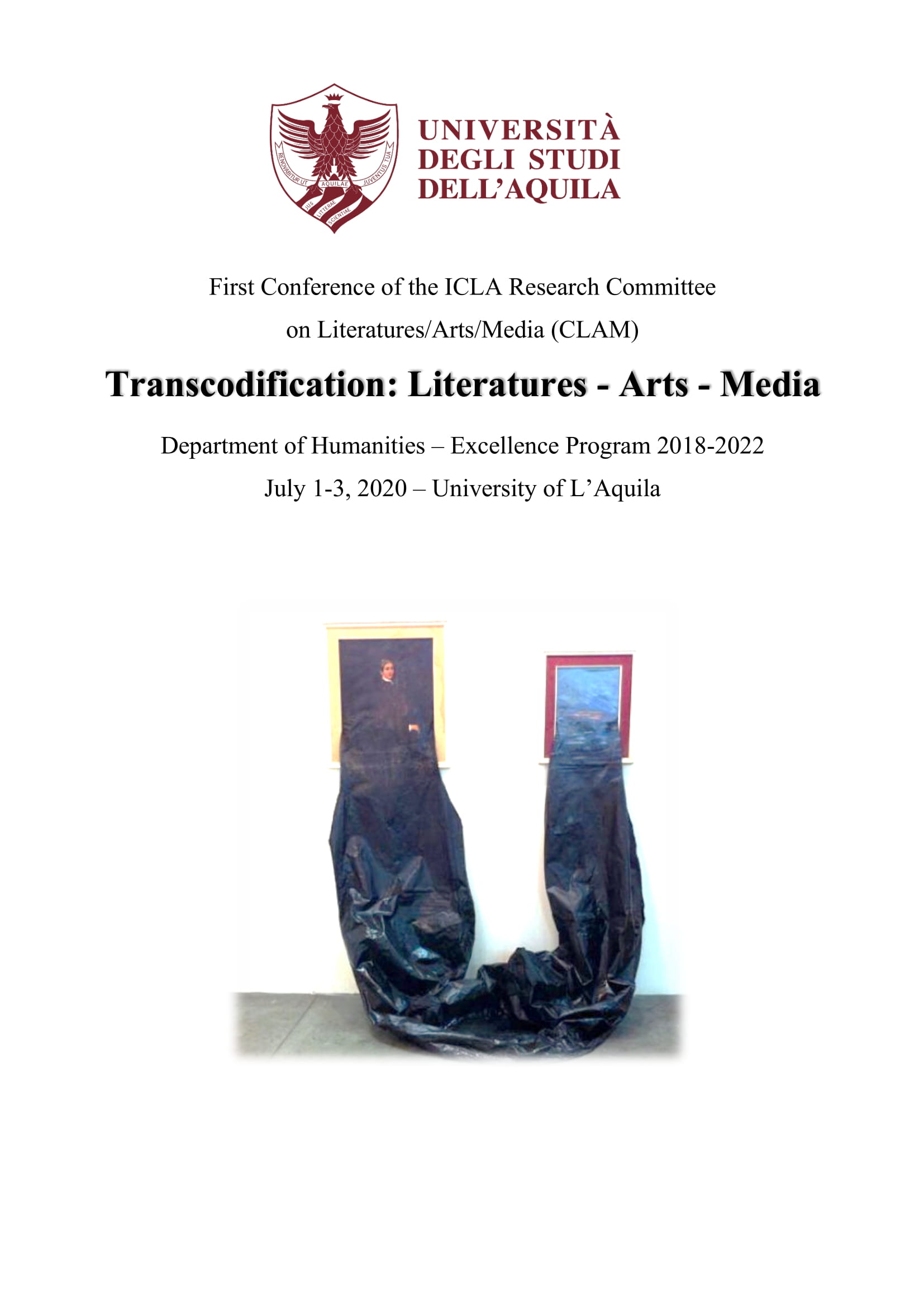 Due to the international coronavirus outbreaks, the conference is postponed to 1-3 July 2021. We apologise for any inconvenience.

You can find more information on the website of the conference: https://www.clam-icla.com/

The transition of narratives, characters, themes and iconic elements from one code of representation to another represents one of the most fundamental processes through which the literary and artistic fields evolve, transform, and expand within a given culture. These same processes of transcodification also play a vital role in how different cultures interact across time and space. In the classical world, mythical narratives were disseminated through the Homeric epic, the theatrical genre of tragedy and the visual arts. From the onset of Christianity to the late modern age, the history of European art has been driven by the adaptation of episodes from the Bible and other religious texts across a number of media, from painting to sculpture, from medieval plays to sacre rappresentazioni, from musical texts to folkloric practices. Fables have moved from orality to the written form; at the same time, written narratives have been circulating through oral transmission. Medieval and early modern manuscripts were illuminated; modern and contemporary texts are illustrated. From antiquity to the contemporary media franchise, transcodification is ubiquitous.

Today, mass media and the digital revolution have changed—and are still changing—the notions of author, text, public, intellectual property and medium that were inherited from the 20th century’s critical traditions. Literature, cinema, theatre and television are now facing the multisensory logic of the contemporary mediascape, a logic based on inclusion, acceleration, simultaneity and hyper-mediation. The idea of text has expanded into that of hypertext, while narration is becoming more and more pluralistic, polycentric and antihierarchical: as proposed by Lev Manovich (2010), narratives are becoming more and more like softwares that can be endlessly rewritten and reused. Cinema is being re-articulated in the forms of the so-called postcinema, in which films become part of a larger system of converging media and cinema can be relocated outside its traditional and institutional spaces. This medium’s formal structures are being disseminated in urban spaces, thus giving birth to new forms of visuality like videomapping and media façade installations. Media may quote and thematize other media, according to the well-known concept of re-mediation coined by Bolter and Grusin (1999), thus generating what Irina Rajewsky (2002) defined as “intermedia references”. The interactivity and immersivity of videogames, augmented reality and virtual reality, as well as the transmedia and crossmedia organization of storytelling (especially in the case of TV series), also suggest a deep sense of engagement towards media hybridization and the exploration of innovative forms of textuality. Finally, the question has arisen, and is still being debated, whether it is appropriate to consider the theatre as part of the cluster of forms which, since the middle of the 20th century, have been subsumed under the general label “media”.

Given these premises, the first CLAM conference Transcodification: Literatures – Arts – Media represents an invitation to investigate the principles and practices of transcodification across time and space, as well as to discuss re-mediation as an aesthetic category which implies fluidity, fragmentation and pluralization. The conference’s main purpose is to offer an intermedial perspective on fiction and the arts taking as a starting point the insights provided by the most recent developments in comparative literature. More specifically, such an inquiry’s aim is twofold:

We encourage contributions addressing any of the following areas or any interrelation between them:

We invite you to send paper proposals to clam2020conference@gmail.com

Proposals should include an abstract (300 words max), five keywords and a short biographical note

The working language of the conference will be English. The deadline for abstracts submission is February 10, 2020.

Participants will be notified of acceptance by March 15, 2020. The conference will not have a registration fee.

The conference venue is the Department of Humanities, Viale Nizza, 14, L’Aquila.

Further information about accommodation and how to reach the conference venue will be published at www.clam-icla.com (the website is currently under construction).